1-Just how legit Dwayne Haskins is. 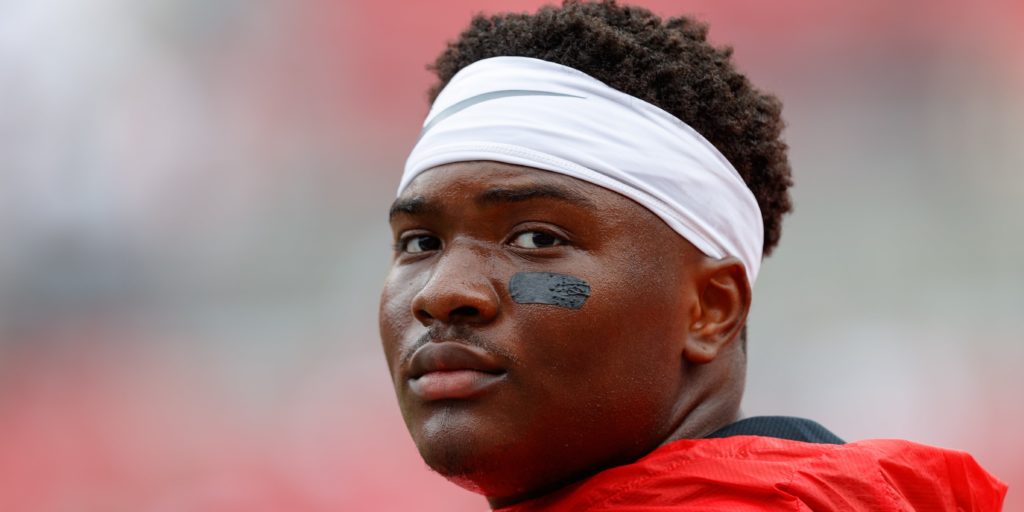 The one eye-black Swag Gawd of Columbus has looked unstoppable through two games, as he has put up stat-lines straight out of freshmen mode on NCAA video game franchise (R.I.P)

Through two weeks he’s thrown for 9 touchdowns and 11 incompletions with a passer rating over 200 in both contests.  The only caveat? The two teams he played, Oregon State and Rutgers are probably both  in the bottom 5 of teams in Power-5 conferences.  Rutgers specifically, as they will fight for their honor on Saturday to try and prove they aren’t THE worse team in Power 5 football, as I wrote about here.

He’s bringing an Urban Meyer-less Buckeye squad down to the lone-star state to take on Gary Patterson and the ever present Horn frogs of TCU.  Through two weeks the Frogs place 6th in the country in total defense, allowing only 213.5 yards/game.  This will be the first test for a early-season heisman frontrunner, as he’ll see a legitimate defense as a starter for the first time.

What I think will Happen.

I think Haskins proves himself as a viable QB in the Ohio State system, as OSU covers easily.  TCU will throw him some interesting looks, and he might turn the ball over, but I expect Buckeye fans to leave Jerryworld happy about what the future holds.  His numbers won’t be as flashy as they have been, which is to be expected, but this game will boost his heisman campaign.

LSU beat an overrated Miami team in week 1 and had the masses singing their praises.  I, am smarter than the masses however so I decided to reserve judgement to when they actually played someone worthy of a top 10 ranking.  That week is here.  I’ve written before about LSU quarterback troubles, and this game will go a long way in determining if Joe Burrow is the man to break that trend.  I personally don’t think he is, but he doesn’t have to be in order for the Bayou Bengals to have success.  I’ve seen that defense live, and it is indeed scary to the first degree.  The only issue, is Auburn should trot out an offense capable of scoring points.

What I think Will Happen.

This should be the best game of the week, and for good reason.  Two teams with  phenomenal athletes going at each others jugular.  Auburn is favored -10.5, and gun to my head I would pick LSU but I didn’t touch this one.  LSU had the athletes to shove Miami’s shit in and garner a big early season victory.  That’s not going to happen against this Auburn team.  I expect a relatively low scoring grunt fest with the occasional big play.  Unfortunately for LSU, while Nick Brosette is a quality back…Leonard Fournette or Derrius Guice he is not.  He doesn’t have the game breaking ability that LSU needs in order to win this game.  I expect Jarrett Stidham to make a couple big plays with his feet and ultimately lead his Tigers to victory to the tune of 20-10 or so.  Unfortunately for LSU, I think this game will expose them for exactly what they are.  A powerful and athletic team that’s going to struggle to put up points.  I think they’ll go 8-4 or so in the regular season, end the year ranked in the 20’s then beat an overmatched team like Kansas State in a bowl game.

3-If Mike Gundy’s Offense can be Prolific Without a Good Quarterback?

In the sneaky 2nd best game of the week, Boise St. plays at Oklahoma State.  OSU has beat up on 2 cupcakes thus far this season, but the scores have masked the QB issues in Stillwater.  Taylor Cornelius has thrown for a bunch off yards, but he’s also been picked off 3 times.  Decision making like that in an air-raidesque offense against the likes of South Alabama and Missouri State, doesn’t bode well when you play a team with a pulse.  The Bronco’s are undeniably joosed up about this game, as a victory could go a loooong way toward their slim CFP hopes.  Can Mike Gundy figure out how to keep his Cowboys offense scoring points without a QB like Mason Rudolph at the helm?  Boise is likely going to give them fits.

What I think will happen

I like the Broncos in this matchup, as I bet on them straight up to win.  I haven’t been impressed with what I’ve seen in Taylor Cornelius, and I think the only reason OSU is favored is because it’s a home game.  As someone who has been in that stadium, the home field advantage should be negligible.  I expect some trouble in Stillwater this year, because once league play starts, I don’t see the Cowboys keeping up with upper eschelon offenses the Big 12 has to offer.

4-Should the City of Tallahassee Be Worried?

There’s no other way to say this: Florida State has looked like dog shit this year.  From getting Son’d on Primetime to Virginia Tech, to barely beating Samford on a game the ‘Noles were lucky was televised on the scarcely watched ACC Network, Willie Taggert has left quite a bit to be desired through two games on the job.  The ‘Noles have to go to  the Carrier Dome in Syracuse to play a high powered Dino Babers team that just last year knocked off Clemson.  Florida St. is currently 3 point favorites, which would worry me more than it should if I was a Seminoles fan.

What I think will happen.

I honestly have no idea.  Florida State is obviously going to be immensely more talented on both sides of the ball, but their team has looked like they signed up for the chess club, instead of the football team this year.  I’m leaning  toward FSU figuring things out and pulling out a win, but playing against a team that’s going to put up points, the ‘Noles haven’t shown me this year they are capable of keeping up.  If that’s the case, I can’t wait for the inevitable Danny Kanell meltdown.

5-Who the Shittiest Team in the Country is.

I wrote about  this earlier here, but we really are in for a treat.  Kansas Vs. Rutgers.  For all the marbles.  Each team out to prove that they aren’t the worst team in the sport.  Gonna be a doozy.

What I think will happen.

Incompetancy.  I would say a ton of turnovers, but that would assume the respective defenses could force them.  This game could end 0-3, or it could end 63-47, who the hell knows.  Kansas is favored vs. a power-5 team for the first time since Obama’s first term, so I guess I’ll take them.

One thing is safe to say.  After both teams last successful seasons came from coaches accused of being too crazy and hardass…Be careful what you wish for.  Sometimes you don’t want to see how the hot dog is made.

It’s still early in the season…

So we’re blessed in that we’re still discovering the landscape of the 2018 College Football Seasons.  With a couple of marquee matchups and some teams dipping into conference play, this week should pull the curtain back just a little bit more to see what we’re working with.