Few things in life compare to going to a big sporting event.  Going to a big football game? Great.  Baseball games aren’t as exciting but they’re great to go to and beat the dog days of summer.  Even golf is evolving to the point where tournaments are fun to go to now, as opposed to the austere event it they have been for so long.

Despite how great it is to go to the live sporting event of your choice, like everything else involving the general public, you’re going to run into assholes.  While not ALL of the people on this list are assholes, chances are I wouldn’t want to hang out with any of ’em. 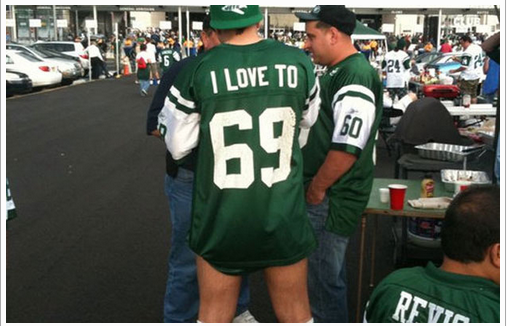 Imagine working all day, getting a paycheck and then spending it on something that fucking dumb.  I’m not against custom jerseys per se, I’ve seen some funny ones in my day. For Example:

You rock this jersey to SEC media days? I’m gonna laugh my ass of because its original and funny.  You put a played out 69 joke on the back of a jersey? I’m gonna name you a top ten loser I might encounter at a sporting event.

9: The Guy Wearing Apparel of a Team Not Playing:

You usually see this with Lakers or Yankees gear (Shocking).  Thursday night game between the Raptors and Celtics? Well lookie there, its a guy in a Kobe jersey behind the broadcast booth.  Say bro, why are you wearing a Yankees hat on a June game between the Diamondbacks and the Padres?

8: The Old Person Telling People in Front of them to Sit Down.

Buddy, I’ve got breaking news for you.  These people somehow still exist.  It’s a God damn football game, sir, not Hamilton.  The reason we gathered here today at this stadium with the loud music and cheering is actually to have fun.  You want to sit down? Buy the HD package and watch at home; It’ll be cheaper too.  Or, realize that people are going to stand-up at sporting events and deal with it.

Besides this not being remotely funny, what are you really trying to accomplish here? You want to get on TV? I still haven’t figured this one out.  If you wear a 69 jersey I get it, you’re trying to be funny.  It isn’t, but I get what you’re going for.  If you yell something on a tee shot that’s funny, I’ll chuckle.  I’m not a golf hardo where I won’t enjoy the tournament because of that.  In fact, I think stuff like that is helping golf enter the present age.  Buuuuuut, let’s see some originality people.

Usually NFL games is where you see this the most; over-served fans gettin in a little tussle in the parking lot.  These are the same people who hit the bars on the weekend, not to have fun or try to pick up chicks, but to get in a fight.  Aiight boss, calm down, we get it.  You’re a hardo and a badass. but I’m just trying to leave and hit the bar.

5: The Guy Rockin’ Golf Shoes at the Golf Tournament.

We’ve now reached the Hardo section of the list.  Someone explain this to me.  Golf shoes are worn to grip the ground while shifting your weight, usually in the form of a golf swing, unless I’m off.  You’re 43 years old, you talk about the weather and your mortgage with your office secretary, and hit up Sea-World for vacation last year.  You’re pumped up because you took a day of PTO to catch the Friday round of the Colonial and copped a new pair of Foot Joys to show all the lovely ladies of DFW.  You’re gonna kill it man, for sure.

Great parody twitter follow of this guy. He’s rockin’ jean shorts, a plain, solid colored T-shirt and all white New Balances.  He also fancies himself a grill master and thinks his kid is going to be Mike Trout.  His favorite hobbies include reminding your kid not to swim on game day, asking your kid if he wants to soft-toss and telling the volunteer umpire where the strike zone is.  You now have a picture of who this guy was in your life.  Your welcome.

3: The Adult Wearing a Glove to a Baseball Game. 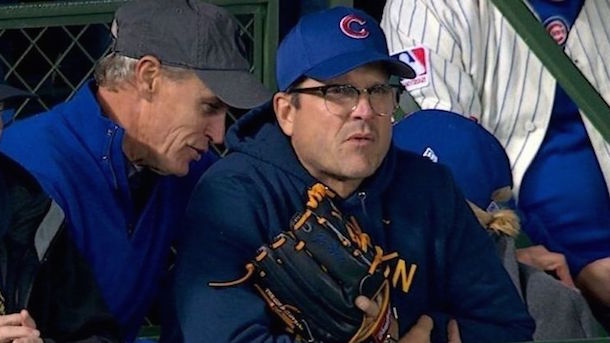 What if I told you it was possible to catch a baseball with your bare hand, and people have actually done it before? Imagine being so caught up in trying to catch a home run, that you can’t eat any of the food at the ball park?

2: The Guy Taking a Foul Ball/Home Run from the Little Kid.

Ricky Ledee hit a homerun at the Ball Park in Arlington long ago, and some guy took the ball from a bunch of little kids (including me).  Ricky Fuckin’ Ledee.  Now we’re even.

For those who are blissfully unaware, I apologize for shattering your ignorance on who “Marlins Man” is.  He travels across the country playing out basically every sports fan dream of catching the best games of the year.  Turn on Sunday Night Baseball and chances are you’ll see his orange jersey behind home plate.  Chances are he’ll be on his phone tweeting about how many “fans of his” have come up to him to say thanks for supporting the troops.  The guy lives in just an ABSOLUTE fantasy world. I mean, check out his Twitter.  There’s really not a whole lot more that needs to be said, but I will never not laugh when I think back to the time he showed up to the Marlins Town Hall Meeting with new owner the legendary Derek Jeter and gave us these highlights.

Marlins Man now addressing Jeter. Asks Jeter, “do you know who I am.” Jeter says, “I’ve heard of you.”

Jeter also telling @Marlins_Man I am not going to cruise around in the Marlins Car.@Marlins_Man offered Jeter to cruise the South Beach strip to generate good PR

Marlins Man claims that he has been offered by 4 other MLB teams to sport their jersey. Claims the prior ownership was not grateful for his free advertising, but he continues to wear his Marlins jersey despite that.

So congratulations Marlins Man, your team sucks…but you won something today!